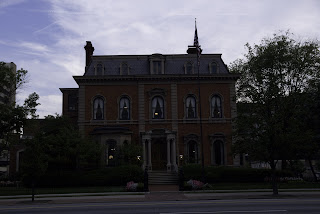 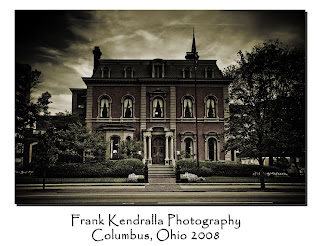 I took this image a few weeks ago while walking in downtown Columbus, Ohio. It was later in the evening and I had some time to enjoy the city. [I was in Columbus on a business trip.] The lines and shapes of the building caught my attention. However, regardless of how I took the picture, I could not capture it in the manner I saw it in my mind.

However, after some 'playing' in Lightroom 2.1 I was able to create the second image that matched the drama I saw in my mind. I envisioned a building from the turn of the century with late night meetings and discussions concerning the future of the area.

The first image is directly out of the camera and the second image is after some 'artistic' liberality was used. :-)
Posted by Unknown at Tuesday, September 23, 2008

Nice post-processing work! You've got to teach me these actions of yours in lightroom. :)

Thanks! Great idea, I need to start writing down what I do and post them to the blog!

Very nice image, Frank! The second one is very erie, especially with the dark whispy clouds in the corners. Nicely done!