.
It is not a fixed aperture lens which causes 'problems' when using this in low light and moving subjects. What this means is at 300mm the fastest aperture is f/5.6 and at 70 the aperture is f/4.5. Therefore, fully zoomed the lens maximum aperture is 5.6 which is not very fast and if the light is limited will present problems to creating a sharp image. However, when the light is fast; the vibration reduction [vr] combined with the ED glass makes this lens a tremendous purchase for <$500. The first image was taken using this lens and the only reason there is no motion blur is because the guest minister [Christopher Alam] was praying and not moving around. The vr on this lens is amazing. It eliminates or reduces any movement on my part [it doesn't reduce movement on the subjects part] and enables me to hand hold a long focal length at slower shutter speeds. However, even with the vr I normally brace myself on something. In this case, I braced myself on the balcony ledge.

Using this lens at an outdoor sporting match [soccer, non pro football, etc] could prove to be a challenge if the light isn't good enough. If the light drops too low then you will not be able to maintain a fast enough shutter speed.

This lens proves to be an excellent choice when lighting is excellent.

In the third image the lighting was great and the lens combined with the D200 produced great images. The third image was taken at the Pittsburgh airshow in the spring of 08. If you are comparing this lens to the much cheaper 70-300 g version and are asking why the difference in cost. This lens is more than the physical differences. I used the 70-300g in the past and although the focal length is the same the similarities end there. The image quality is much better combined with a metal body versus the plastic body. This lens also has the vibration reduction which makes it a valuable asset. If you do not have the 400-500 to pay for this lens then there is a middle alternative by Nikon.

is different but similar and can be bought for $200 used and does not have the vr and has less lens elements. Keep in mind if you need the 300 mm focal length you will need to ensure you have a faster shutter speed to compensate for camera shake. If you cannot obtain the faster shutter speed, then some support is needed.

Nikon and the third party manufacturers make a cheaper alternative in this focal length as well as the 55-200mm [which I owned]. It is a plastic lens and is not a 'fast' lens. The maximum aperture is f/5.6 at 200mm and you will encounter the same problems I described in this post.

is a tremendous lens when the lighting is great but there is nothing like shooting with the Nikon 70-200mm f/2.8G ED-IF AF-S VR

to Nikon's more expensive version. The Tamron is a plastic lens [which makes it lighter] and does not have the vibration reduction which reduces its price to less than $700.

Have fun and get out and capture the beauty of life!
Posted by Unknown at Friday, December 05, 2008 No comments:

In previous posts we discussed the purchase of a camera body.  I quickly learned that camera bodies are like computers [which they are when you think about it] and they go down in value very fast.  Today's latest and greatest camera body which sells for [pick a price range] and in 12-18 months will be selling for a fraction of its original release cost.  Why? Because camera companies continue to 'inovate' the way cameras are built.  What does it mean for the consumer?  As I stated in previous post; my suggestion is to purchase slightly used camera bodies.

This philosophy is based upon the principal that buying good quality lenses is where the consumer should put their money [concerning camera equipment].  If you buy slightly used lenses, you will be able to sell the lens for nearly the same price you bought if for years later.  Why?  Camera/lens manufacturers do not 'update' their lenses each year.  Yes, there are new lenses being released on a regular basis but there are many great lenses on the market which were released many years ago.

In a previous post we briefly discussed the 50mm f/1.8 lens for both the Canon and Nikon. Today we will briefly discuss my workhorse lens.  The Tamron 17-50mm f/2.8 is on my camera as my general walk-around lens.  It is wide enough to capture nice group shots without the need to get very far back from the subject and it is long enough to do a nice portrait [although I like the 85mm for great head shot portraits].

used in the spring of 07 [after selling some other gear to cover the purchase] for $350 and more than 50% of the images in my Lightroom collection indicates they were taken with the Tamron 17-50mm lens.  My suggestion is to look for this lens slightly used to save money.  A new one will cost appriximately $100 more but you will get a six year warranty for the money.

Both Nikon and Canon makes their own version of this focal range but new or used sells for at least twice the cost of the Tamron. The Nikon 17-55mm f/2.8G ED-IF AF-S DX Nikkor Zoom Lens

Sigma makes a lens in the same range but I do not have any experience with the lens and cannot comment on its performance.  If you combine this with a used camera body for $500 and your budget is in the $1000 range you will have money left over for a memory card and small camera bag.  This range will not cover the 'long' focal distance [which we will cover in future post] but it will cover most shots needed for day to day photojournalistic style shooting.

I highly recommend this lens.  Keep in mind a few 'thoughts'.  This lens is plastic compared to the Nikon version of the lens which is more metal. However, the lens mount is metal which reduces wear on the mount when you attach and detach the lens from the camera.  Since the lens is plastic it is much lighter than the Nikon version of the lens and it is not as 'large' which reduces the 'wow' from indiviudals you are taking their picture.  It is not an obtrusive lens and even with the lens hood mounted.
Posted by Unknown at Thursday, December 04, 2008 No comments:

Email ThisBlogThis!Share to TwitterShare to FacebookShare to Pinterest
Labels: f/2.8, how to buy a dslr, lens choice, tamron, tamron 17-50

Creative additions for the holidays

It is the time of the year when many folks get out the creative thinking cap.  We take pictures and make cards, mousepads, magnets, etc for our family, friends, co-workers, etc.  Did you ever think of adding a font with decorations in it?

There are fonts with snow flakes, Mickey Mouse, Santa, and so many more variations to 'spruce' up your cards and images.  I am not one to go crazy adding many different decorative fonts so the card looks like something out of a spy movie ransom note. However, a different font adds a certain flair to the image.

There are hundreds of sites with holiday fonts.  My only suggestion is to 'google' holiday fonts, Christmas fonts, etc and you might be amazed what you find is available for free.

Below is a small image with a sample of what is available on the net.  Get out the creative cap and try something different. 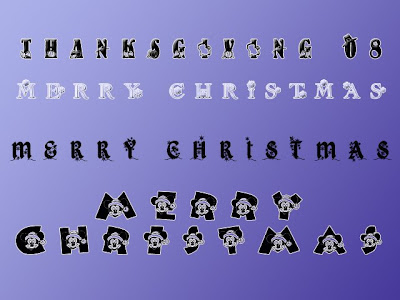 Posted by Unknown at Wednesday, December 03, 2008 No comments:

Every so often I stumble upon a site that has amazing photos that I feel I must share. Click here for an amazing gallery of HDR images from Paris [France, not the spoiled trust fund baby].

There is a translator button on the upper right hand side of the page.  {You will see the little flags.}