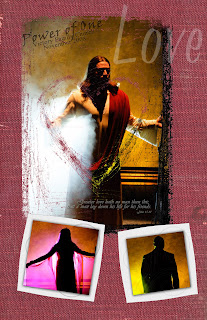 And Esther said, The adversary and enemy is this wicked Haman. Then Haman was afraid before the king and the queen. Esther 7:6

The image in the lower right represents Martin Luther King Jr. who through the power of words set forth a movement in the sixties that changed the course of history [for the better]. "I have a dream..."

Finally, the top image represents the Lord, Jesus Christ who died on the cross to save us from our sin.

John 15:13 Greater love hath no man than this, that a man lay down his life for his friends.

Many other historical figures changed history for the worse, Hitler, Madeline Murray O'Hare, and many others spilled out their vile hatred on others. They put forth a mark that proves that a determined person can influence history. Hence, the greatest message we can gain from this brief illustration is that every one of us can impact history for the better or worse. It is our choice.

Joshua 24:15 And if it seem evil unto you to serve the LORD, choose you this day whom ye will serve; whether the gods which your fathers served that were on the other side of the flood, or the gods of the Amorites, in whose land ye dwell: but as for me and my house, we will serve the LORD.

The images werer shot at f/5.6, 1/15 second, ISO 1000, spot metering and shot in manual.
They were hand held with my body resting on a ledge for support with an effective focal length of 405 [35 mm range]. This was shot with my Nikkor 70-300vr with vr enabled. There are multiple reasons these shots were possible with a slow shutter speed of 1/15 second and a long focal length. 1. The subjects were not moving. Their part in the 'performance' was to remain still. 2. I was leaning on a ledge for support. This support reduced the amount of movement in my body. {Exhale just prior to pressing the shutter. This will reduce some movement.} 3. The VR on the lens reduced camera shake.

By using manual mode over any of the programmed modes, I was able to control the exposure to achieve a gretter effect of the lights behind the subject. Finally, I used spot metering to ensure I metered on the subject only and the camera meter did not take into account the entire scene.
Posted by Unknown at Sunday, November 02, 2008

Email ThisBlogThis!Share to TwitterShare to FacebookShare to Pinterest
Labels: photography, power of one, Victory Family Church